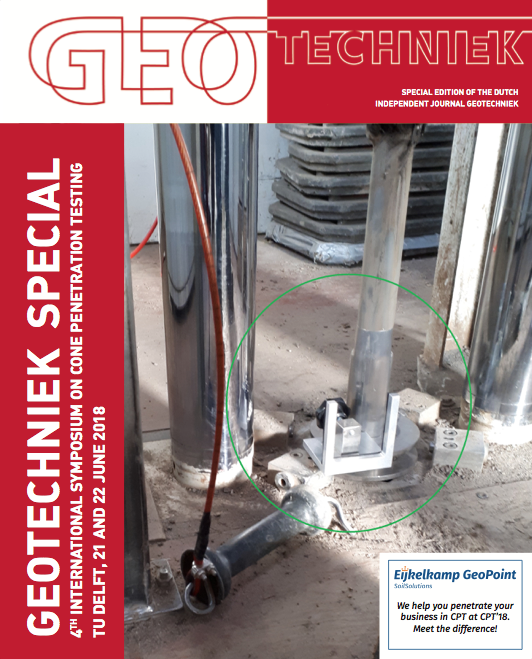 Alboom, G. van (2018): Setting up a system of standard procedures for geotechnical investigations in Belgium, with focus on CPT. Geotechniek 2018, Special CPT, p14

As CPT are the primary tests in nearly any soil survey in Belgium the drawing up of a standard procedure for CPT jobs was set out as a primary goal of the TF.

This paper describes the general approach of assignments for geotechnical investigation and design (the General Provisions document), and the 2 CPT documents referring to respectively the planning, execution and reporting of CPT-jobs, and the general qualitative and/or quantitative advice for geotechnical design based on CPT results.

Multi-layer systems consisting of multiple sequences of thin soil layers are typically deposited in marine environments. The geotechnical properties of the sand layers can be important, especially where it concerns sensitivity to liquefaction. Performing CPTs is a common method to determine geotechnical properties, but the interpretation of CPT within multi-layered soil zones holds large uncertainty. The Dutch ‘Koppejan’-method for determination of pile base resistances could be used to model the cone resistance in thinly inter-layered soils. Model experiments in well-controlled circumstances have been performed to investigate the feasibility of this approach to come up with correction factors to the measured CPT values.

Rotterdam engineers have improved the art of the CPT based magnetic profiling technique.

With the adaptations and improvements, it has become possible to reliably locate obstacles like steel anchor rods (tie-back anchors)

In many current projects, the uncertain position of (steel) obstacles is a major cause of project delay (and cost increase) if the obstacles turn out to interfere with the planned foundation elements.

Rotterdam engineers have upgraded the magnetic CPT instrument such that the magnetic distortion signals are obtained in the proper orientation to earth’s magnetic field orientation.

As insiders know, the response of these sensors is very sensitive to tilt and orientation in respect to the earth’s magnetic North.

In 1968 Arie Pieter van den Berg founded A.P. van den Berg in Heerenveen which focused on the design and production of machines and equipment for Cone Penetration Testing (CPT). This by origin Dutch soil investigation method was still in its infancy and Arie van den Berg assumed the role of ambassador for this technology. In a relatively short time, he contributed to a worldwide acceptance of the method and the associated CPT technology and managed to build a strong international reputation for his company. In 2018, the year that the company celebrates its 50th anniversary, this reputation still stands. The drive for innovation, the high product quality and in-house engineering and production are main success factors behind their leading market position. The introduction of the very compact and fully automated SingleTwist™-system, attests the focus on innovation once again.