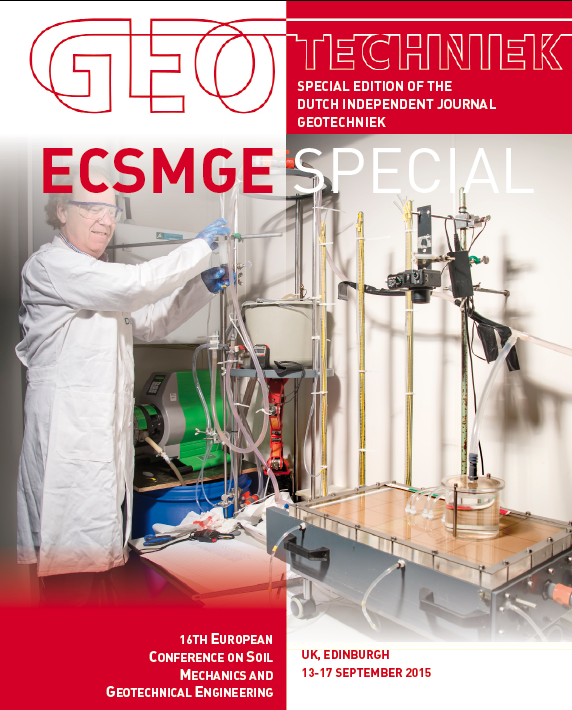 Recent safety studies indicate a significant risk of backward erosion piping as a failure mechanism for dikes. Traditional measures, such as berm s or sheet pile walls take a lot of space or are expensive, in particular in areas with a high infrastructural density. Consequently, there is an urgent need for alternative piping measures. An innovative solution is the vertical sand-retaining geotextile, which has been developed and tested in the field. An optimisation of this method is a coarse sand barrier: a trench filled with coarse sand, covered by a clay layer. The coarse sand provides more resistance to erosion than the inherent sand of the aquifer with its uncertain composition with respect to d70, so that initiated pipes cannot continue to develop. Laboratory and field scale tests suggest that this is an effective and economically feasible method.

The onshore wind industry continues to grow rapidly with the construction and development of many large scale wind farms using large megawatt wind turbines. This development requires a clear understanding of the geotechnical foundation behaviour in order to achieve a safe and economical foundation design. The foundation design however includes the selection of various types of foundations, design methodologies and mathematical models, ranging from basic to advanced. The geotechnical designer needs to make a choice based on numerous codes and standards, design requirements and the anticipated geotechnical soil conditions. In some cases, standards are conflicting, or just lacking specific design guidelines for wind turbines. Based on extensive design experience some design considerations are described in this article.

This landmark highway project in Turkey had many demanding site constraints. This led to innovative construction techniques being adopted by the Client, Designer and Contractor.

This paper presents the findings on the behaviour of organic soft soil (clay and peat) using a variety of state-of-the-art laboratory tests. Moreover it addresses the importance of critical evaluation of the each test and the parameter determination. The tests are performed within a research program on behalf of research foundation “STOWA” to verify the stability of a local flood defence of the waterboard “Hoogheemraadschap van Delfland”. Oedometric tests (OED) and constant rate of strain tests (CRS) have been carried out to determine the preconsolidation stress, after which anisotropically K0-consolidated undrained triaxial tests (TA-ACU) and direct simple shear tests (DSS) have been executed with three different consolidation paths. All tests have been performed on undisturbed samples to obtain reliable soil parameters.

The undrained shear strength (Su) is normalised by the vertical consolidation stress (s’vc) to derive the undrained shear strength ratio (S). By plotting S versus the OCR, both the normally consolidated value (S;nc) as the exponent (m) to describe the overconsolidated behaviour are derived. The OCR is defined as s’vy divided by s’vc. This paper presents additional criteria to define the ultimate state of Su.

In the early 1960’s Henri Vidal, introduced the Terre Armée (Reinforced Earth®) construction technique. Henri Vidal conceptualized this method and built the first full scale demonstration. For 50 years since, Terre Armée has set the standards for reinforced soil structures and has been involved in more than 50,000 projects all over the world, accumulating knowledge and experience in the field of engineered backfills.